I want to share the basic world generation algorithm used in Pugnacious Wizards 2 and some things I did to add as much replayability, variety, and interest to the world generation. Hopefully you can try some of these ideas in your roguelikes.

In case you haven't seen it yet, the game takes place in a densely packed single level castle that's made of a 9 by 9 grid of 7 by 7 rooms. Here's an example of what the entire game looks like on the first turn without FOV applied: 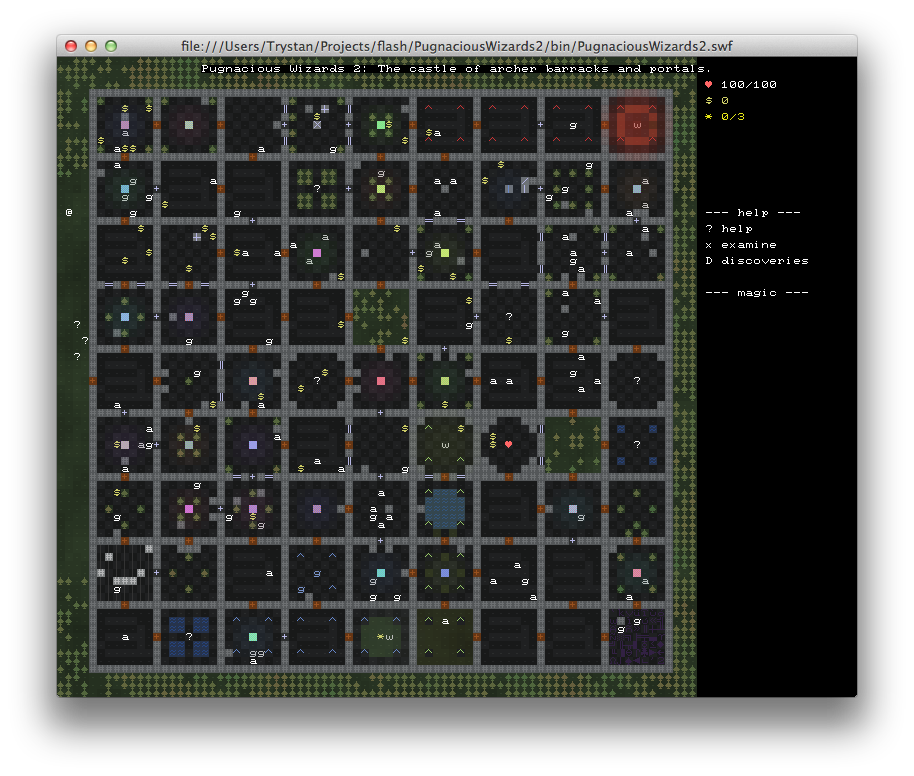 Here's the basic algorithm that Pugnacious Wizards 2 uses to create a level. It can be adapted to other roguelikes too:

So that's the basic algorithm. A perfect maze with extra connections, treasures in the dead ends, themed rooms, themed areas, and extra loot.

But that's not all that happens. The real variety comes from tweaking the worldgen algorithm itself.

Tweak the variables. These variables include what percent of grass tiles are trees, what percent of walls that have see-through tiles added, what percent of doors are unburnable stone doors, how many extra room connections are added, how much total gold there is, and a few other things. In the above example picture, you can see how trees are common in the courtyards and as decorations in other rooms.

Tweak the lists. It starts with a list of every room theme: 12 or so in total. Then a few are removed at random - they won't show up in this game. Then a few are chosen from the remaining at random and added to the list again - these themes will show up more often than others. This small difference means you can play a few games before seeing each theme. It can also change the feel quite a bit. A dungeon with lots of portals plays differently than one with no portals and a dungeon with lots of anti-magic rooms plays differently than one with lots of trap rooms or lots of creature rooms. In the above example picture, you can see how there are plenty of archer barracks but no guard barracks: they must have been removed from the list of room themes.

Apply explicit variations. There's a list of 30 or so variations. Two, three, or four are picked at random and applied to the map and added to the subtitle. Some variations just make one room theme far more common by adding it to the list of themes 9 times, some will change the stats of archers or guards, some change how much damage is done by fire, ice, poison, arrows, or melee, and some have other small effects like changing the prices of spells, how large explosions are, etc. A game where skeletons regenerate in only a few turns is very different than a game where fire traps are far more common and do double damage. In the above example picture, you can see how archer barracks, which have an "a" pattern on the floor, and portal rooms, which have a glowing block in the center, are far more common than other rooms. These variations also affect the subtitle.
5 comments: